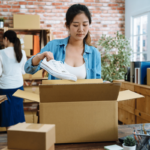 How to Pack Shoes for Moving12 min read 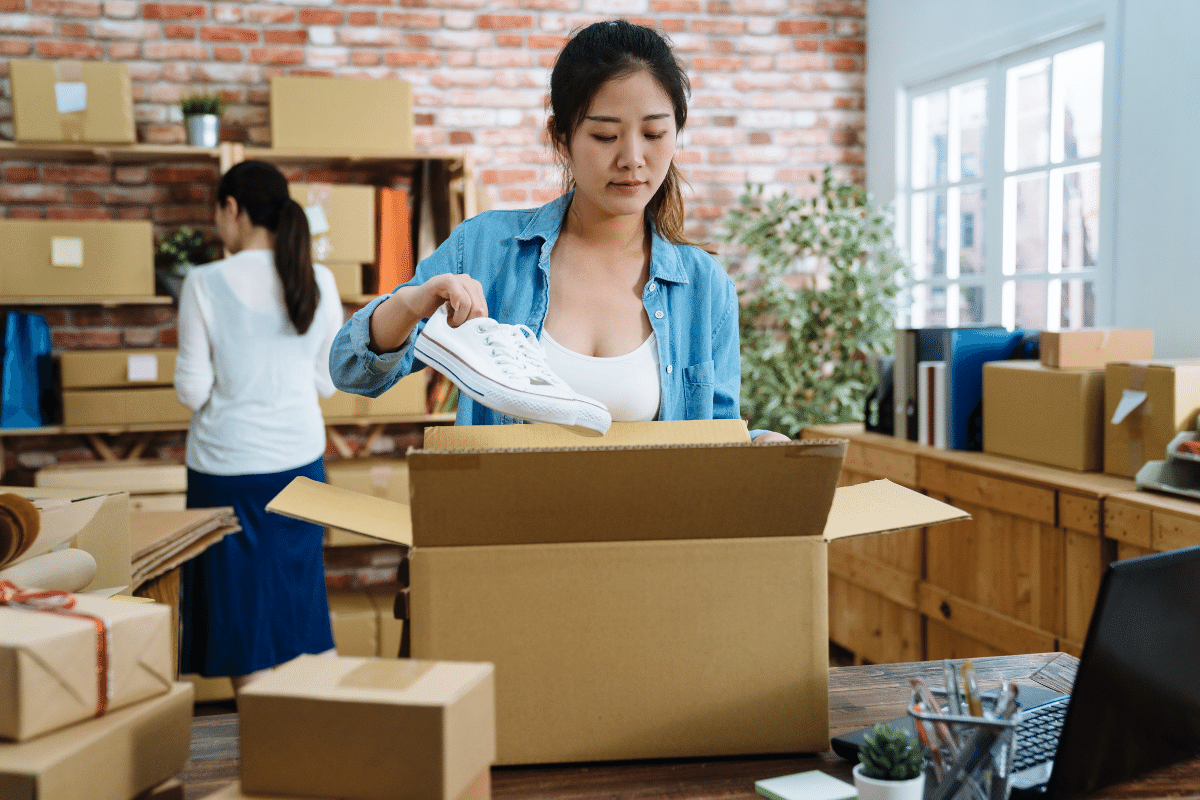 How to Pack Shoes for Moving12 min read

Packing shoes for your move doesn’t have to be difficult. We’ve compiled easy hacks that will keep your shoes safe and simplify the whole process. Knowing how to pack shoes for moving can protect them from getting dirty or damaged, and make unpacking a breeze. Follow this guide full of packing tips and shoe storage ideas!

Prepare Your Shoes For Packing

To keep your shoes in good shape, it’s important to take some quick preventative steps before packing them away. Follow these easy instructions:

Get rid of the ones you don’t wear

That’s how you’ll be able to fit more things in your moving boxes and suitcases, which means less time packing and unpacking again when it comes closer to the actual move date.

Donating your gently used shoes can help a charity. If you don’t know what they need consider donating some tennis or work boots, because those are often in high demand!

You should also check with the organization first before shipping off multiple pairs of footwear so that it won’t incur extra fees for trash disposal expenses – not everything is allowed at every donation center.

One of your top priorities, as you pack shoes for moving, should be to clean them first. Why? Because doing this allows you how to pack shoes in a less cluttered way and also helps avoid any stains that may occur from the dirt or debris picked up during transit. The proper method is to stuff each shoe with tissue paper before sealing it shut, but if you don’t have time for this, make sure they are at least put into a separate plastic bag so nothing gets on them!

To avoid the risk of mold and mildew growing in your shoes, be sure you allow them time for air-out after cleaning. This will also help eliminate any moisture that may have been absorbed by the fabric during storage which could potentially cause rot along with other bad odors!

It is important to make sure all of your repairs are done before the move. You may be busy now, but you will find yourself even busier in a new place and perhaps with more things breaking on top!

Toss out your old shoes and make room for the new! Put all closed-toe footwear in one pile, including any you’ll need when traveling. Next go through each pair of footwear looking carefully at condition (i.e., whether they’re worn), fitment issues or just not being what you want anymore before donating them if necessary. Sell on eBay where people buy fashionable clothing or donate to charitable organizations like Goodwill, Salvation Army, and the Red Cross.

Choose the Right Material for Wrapping and Packing Your

When you’re packing up your shoes for the move, it can be hard to find a good material that won’t leave any residue. There are too many options and they all have their pros but also cons! Printed newspapers usually wear away quickly. Colored papers often stain his or her clothes (and those stains don’t come out easily).

So what’s an average person in search of shoe-storing perfection do? They grab some old socks since at least these will help cushion against damage from rough handling by baggage handlers plus there is no need whatsoever to invest money into new wrapping paper if we still plan on using our footwear after arrival anyway.

How to Pack Shoes for Moving

Often people on the move may not initially consider packing their shoes at all because they’re simply thrown in either box or bag last minute which can make them scuffed/crumpled, damaged permanently if packed incorrectly – who wants?

Consider how many times you will be wearing them before unpacking and how often to give yourself a general idea of how much cushioning is needed. You can use tissue paper, newspaper, or packing peanuts for added protection – although we found that the plastic bags from the grocery store work just as well and don’t leave behind any additional mess. It’s also good practice to keep all shoes in their own separate boxes/bags so they aren’t touching each other during storage which can cause damage to both footwear and shoelaces.

For those with delicate heels: place your heel into an old sock then cover it completely with bubble wrap. Make sure there are no bubbles underneath since these could dig into your skin when walking around barefoot inside our storage unit.

As for how to pack shoes into boxes, that’s a bit trickier. If you want them stacked on top of each other without too much hassle then the answer is simple: slip in some tissue paper between pairs and place one pair on either side of the box, which will allow you to stack another box right above it. This method works well when packing dress shoes but if boxed sneakers are our concern better make sure they’re packed tightly enough or else placing another heavy object might damage their soles – also don’t forget to separate your dirty shoes from clean ones before putting any inside cardboard containers!

If we wish to avoid having his or her footwear lay atop others then perhaps dividing things up with dividers would be the best option especially if we have a lot of shoes to pack. There are many options out there so find the right one for you!

Heels should be placed in shoeboxes with tissue paper on top, sides, and bottom – it’s also a smart idea to place them vertically against the back wall, where they won’t occupy much space but remain protected from any damage that might occur during transportation if handled improperly.

If our footwear is made of leather then perhaps placing each pair inside its protective bag will make sense this way sandals or boots get additional protection while being stored away. These can be bought at the dollar stores or found pretty cheaply online too. If these aren’t available maybe old pillowcases would do just fine? Just make sure they’re clean before using them.

I prefer to pack both shoe boxes and shoes that are just wrapped in packing paper vertically, but if you have pointy toes like me it’s best not to put them at the bottom where they’ll crush everything beneath them when we move! Instead, use more lightweight items as your “heavy” lot or stack heavier ones on top for protection (or leave one space between all stacks).

If stacking isn’t an option there are even better alternatives though – make sure lighter things go first so less pressure is placed upon fragile objects such as electronics. Then follow suit by placing larger bulky furniture pieces last while wrapping tightly with lots of tapes before putting away again extra blankets/folders, etc. See what works best for you!

Box up the nicer pairs individually

You’re probably not too concerned about that old pair of sneakers getting scuffed or damaged during the move, but you should be mindful of those expensive heels and your perfectly shined loafers! Protect them by boxing each one in its box with packing paper around it so they stay pristine.

Tie sneakers together by the laces

Tie your sneakers together by the laces, so that when you need a matching pair they will be right there.

It’s important to keep pairs intact and tied up in order not to have them getting mixed up with other shoes or piling on top of each other while packing away for storage which can happen if we don’t pay attention!

Pack a few essential pairs in their box

Shoes are often not one of the first things unpacked since as long as you’ve got your go-tos you’re not likely going to need them right away. Still, every family should make sure that they’ve got easy access to two or three essentials – shoes which can be easily put on when packing up at home and some suitable running/walking shoes so there won’t be any problems getting around during move day! You’ll probably end up wearing sneakers (or something similar) while unloading everything into storage units so save these pairs just in case those inevitable quick trips out from time between boxes become necessary?

Pack out of season shoes separately

You know, there are a few things that can happen when you put off unpacking your shoes. First of all, if it’s summertime and we have more than enough space in our new home for out-of-season boots to breathe without being packed together with other pairs like, then take advantage by sorting through those winter footwear options as soon as possible so they don’t get forgotten until next year! If not well just mark which box contains what types of sandals/flip flops etc., set them aside until needed later down the line, and go on about the unpacking.

Only use clean packing paper

Don’t use newspapers for packing! The newspaper might be a good substitute when you’re putting away other items around your house, but not shoes. The ink from printed newspapers can leave stains that are difficult or impossible to remove later on and colored tissue paper also leaves behind residue which is just as bad in many ways so only pack with clean unused packing material like towels or sheets of newsprint.

If you’re using newspaper, make sure it’s clean and never use any kind of glossy or thick paper that will caus rub up against each other which can create scuff marks on the exterior surfaces, damage how well the soles grip when walking due to accumulated dirt from rubbing against cardboard boxes during transit (which could lead to accidents), cause deformation over time, and more.

If there are two types of similar shoes like dressy flats with casual flats then put them into separate boxes for easier unpacking later down the line where everything is organized by category instead of just randomly thrown about everywhere creasing in your shoes.

You can use tea bags to keep shoes fresh, but leave them in a position where they will air out overnight before packing them. For those whose odors are more obvious than others (like if you work at an office full of people who wear cheap sneakers), try sticking your dirty footwear into the freezer for 10-15 minutes. This should kill any bacteria living on its surface and help mitigate their smells! And when moving day comes around again? Just put unused teabags under socks – there’s no need to pack anything else as long as each pair contains one pouch per foot.

Pack heavy shoes on the bottom

Whether you’re using boxes, plastic containers, or even laundry baskets to transport your shoes make sure that the heaviest and bulkiest pairs are placed at the base of the load. This will even out weight distribution for a safer journey! Plus if there were delicate items like clothes before then they’ll be able to get through without getting damaged because these heavier transports won’t put any extra pressure onto them as well.

If you’re moving, have a ton of shoes to pack, and don’t know where to start, we’ve got the solution. Knowing how to pack shoes for moving can protect your beautiful footwear from any damage during transit while also making unpacking easier on yourself in the end! Follow this guide full of packing tips and shoe storage ideas. It’ll make life so much easier. Have you tried these tricks before? Let us know what was most helpful for you below! 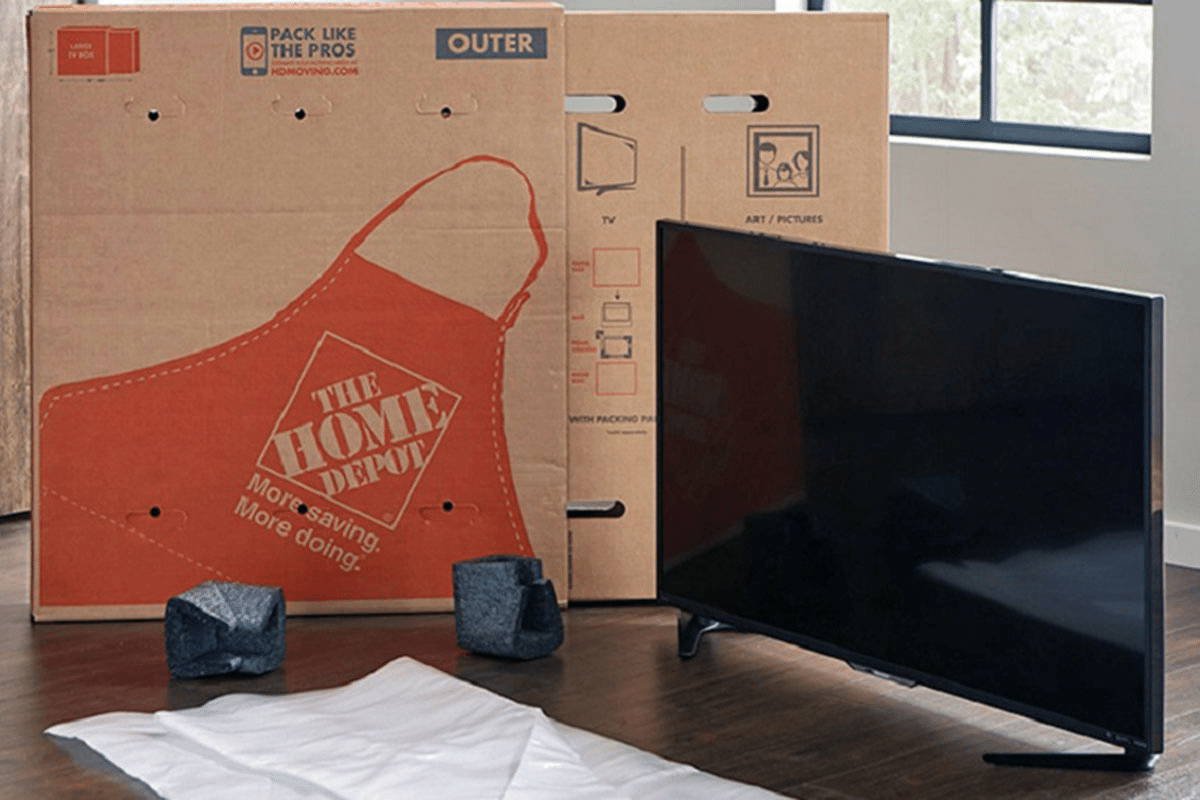 How to Pack a Television for Moving 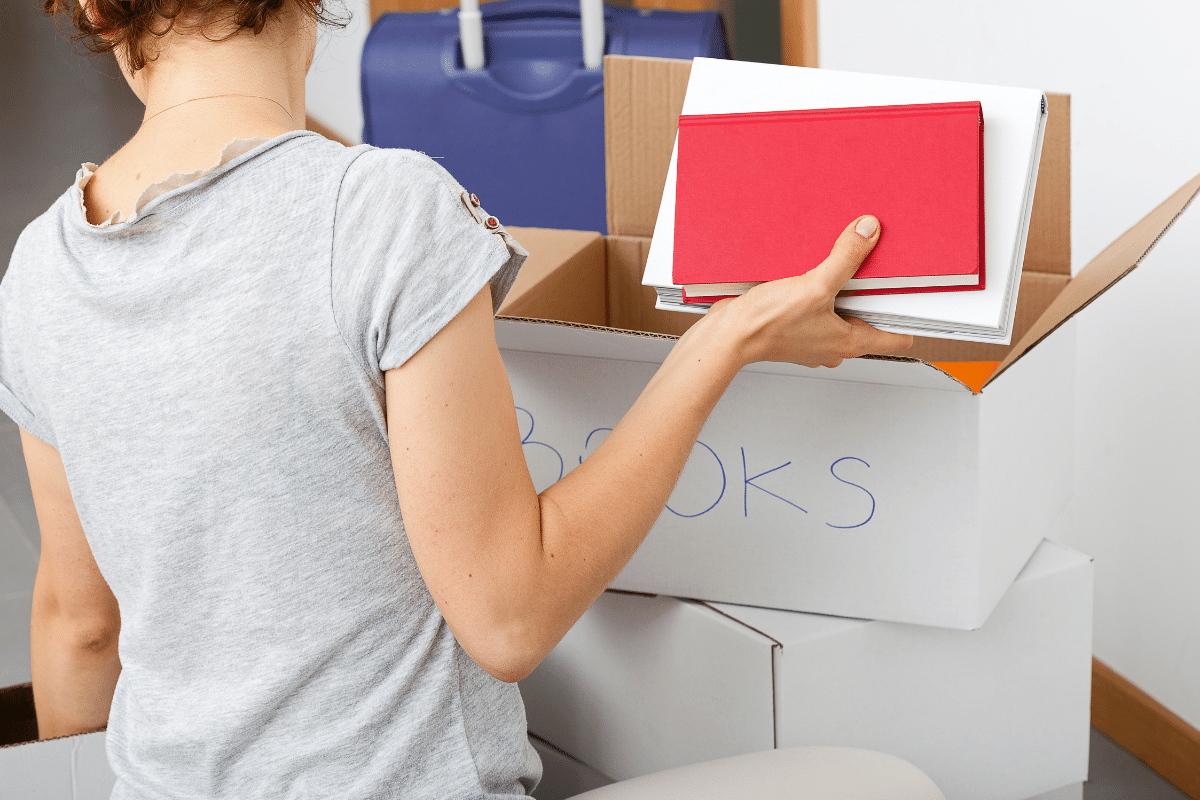 Here’s How to Pack Your Books Properly for a Move